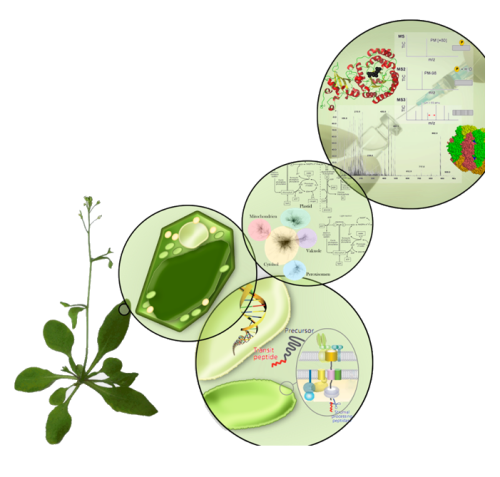 This statement aptly characterizes the changing understanding of cellular processes and illustrates the objective of the chair's research with the biological system plant: the characterization of biochemical networks and the systematic detection of previously unknown causalities in metabolic and regulatory functions of the plant in its environment. The functions of living cells are characterized by enormous complexity and the dynamic interplay of different molecules and classes of molecules. Progress in the field of "functional genomics" allows us to understand this complexity in its spatial and temporal dimension. Thus, it is possible to map the responses of all elements of a molecular class to specific environmental changes, and to understand in high temporal resolution the dynamics in the biological response. Such analyses have shown that biochemical metabolic processes should not be understood as linear arrangements of enzymes, but rather as a complex, mutually influencing network. The same applies to regulatory functions with which living cells respond to signals in order to adapt the expression of their genes to changing environmental conditions. The gaps in our understanding of this complexity are the main reason why biotechnological or medical modifications of biological systems often have unpredictable consequences. This is potentially problematic for biotechnological and medical applications, e.g. to produce certain metabolites in large quantities, to increase the biomass and thus the yield of crops, or to fight diseases efficiently and without side effects.

Orientation of the professorship in research and teaching

The research work of the chair aims to better understand the complexity of the plant system and to uncover previously unknown causalities between regulatory and catalytic functional elements. Methodologically, we use a combination of proteomics and the functional analysis of biological processes with basic molecular biological and biochemical methods. With this combination we aim at a mechanistic understanding of cellular processes. Proteomics, which we use to analyze the dynamic adaptations of protein quantities and their post-translational modifications in response to a perturbation of the system, provides the hypotheses for this. Systems biology, with its tools for modeling biological processes, provides the analytical framework.

The focus of our work is on chloroplasts. Chloroplasts are of central importance for the build-up of biomass and thus for agricultural yield and food security, as they host the reactions of photosynthesis. In addition, other essential biosyntheses take place in chloroplasts, such as the biosynthesis of fatty acids, hormones, and some essential amino acids. With the biosynthesis of aromatic amino acids, the chloroplast provides the target for the controversial herbicide glyphosate. We want to better understand chloroplast biogenesis. To this end, we are studying, for example, how chloroplasts import proteins, which proteins they contain, and how their functions are dynamically regulated in response to changing conditions, e.g., via posttranslational modifications. Two key protein modifications are phosphorylation and acetylation, which allow very rapid adaptations of protein activities to changing conditions and are catalyzed by specific enzymes. One goal of our work is to assign the modifying enzymes their specific spectrum of target proteins and to understand the functional impact of a modification on the modified enzyme. Chloroplasts are functionally closely linked to regulatory processes in the nucleus and cytoplasm. We could show that cytosolic protein degradation via the so-called proteasome controls the assembly of the photosynthetic apparatus and limits it under unfavorable conditions. However, the principle of "safety first" applies, i.e. these limitations already take effect under relatively good conditions and thus significantly restrict the synthesis of biomass. We want to understand under which conditions this control starts, which mechanisms exist for its regulation and how strong the influence on the biomass build-up is.